On Wednesday, March 30, 2022, police executed Controlled Drugs and Substances Act search warrants at two residential addresses in Bradford and one vehicle. Police seized suspected cocaine with a street value of approximately $40,000 and recovered a loaded 45 calibre semi-automatic handgun with 7 rounds of ammunition.

As a result of the investigation, 25-year-old Shaun Krawiec of Bradford was charged with 14 offences including:

The accused was held for a bail hearing.

The South Simcoe Police Service is committed to eradicating drugs and firearms from our communities. We want to thank the Barrie Police Service for assisting with this investigation.

A photo of some of the items seized is attached: 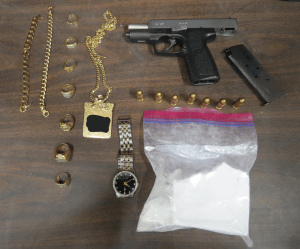