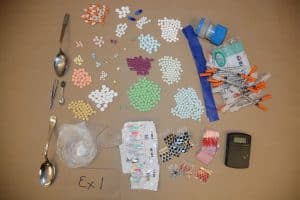 (Bradford, On) A Bradford judge has convicted two men in a series of pharmacy store robberies in the Bradford and York Region area.

In October 2016, South Simcoe Police Service Criminal Investigation Bureau (CIB) investigated two Bradford pharmacy store robberies. The investigation led to identify two suspects. These suspects were linked to further pharmacy store robberies in York region. A three month joint investigation was conducted by the South Simcoe Police Service CIB and the York Regional Police Hold-Up Unit with the assistance of the Ontario Provincial Police Technical Support Branch. The investigation led to the arrests on Thursday, January 26, 2017 of two Bradford men for the pharmacy armed robbery series. Search warrants were executed at two Bradford homes resulting in the seizure of weapons, cash and a large quantity of drugs, including fentanyl patches, heroin, cocaine and a wide variety of other narcotics

On Wednesday, January 30, 2019, 28-year-old Robert Collings of Bradford was convicted of five of six robberies along with numerous drug charges including several counts of possession, possession for the Purpose of Trafficking, and trafficking. These convictions included fentanyl and hydromorphone.

23-year-old Cole Boardman of Bradford was convicted of one Bradford robbery and robbery with a weapon as well as numerous drug charges including several counts of possession, possession for the purpose of trafficking, and trafficking. These convictions included fentanyl, cocaine, heroin and hydromorphone.

Photos of some of the seized drugs are attached.