Back To School Traffic Safety Campaign Week One

(Bradford, Innisfil, ON) During the first week of our Back To School Traffic Safety Campaign, officers laid a number of charges. Operation All Hands on Deck saw every available officer patrol school zones Monday to Friday during the morning drop-off and afternoon pick-up. But our efforts went beyond school zones to include enhanced traffic enforcement across our communities. The goals were high visibility, enforcement and most importantly the safety of children as they attended classes for the new school year.

Numerous charges were laid for a variety of offences including speeding, distracted driving and illegal parking.

Here are some of the highlights:

42-year-old King Township man charged with insecure load on Holland St. West in Bradford after an officer stopped a utility trailer with an unsecured bobcat. Fine $130.

30-year-old Toronto woman charged with unsafe lane change after a vehicle trying to pass someone on County Rd. 4 in Innisfil drove directly into the path of a SSPS cruiser.

5 speeders charged in the first half hour of enforcement on day one of school outside Alcona Glen Public School on Innisfil Beach Rd.

We would like to thank all of our residents who did their part for road safety this week. By obeying speed limits, putting down the phone, driving sober and being considerate, we can work together to make a difference. Road safety is a shared responsibility. Operation All Hands On Deck continues next week. 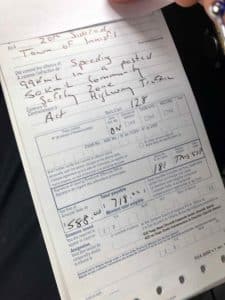 Police are asking anyone with information to contact South Simcoe Police at (905) 775-3311, (705) 436-2141 or Crime Stoppers at 1-800-222-8477 (TIPS). You can submit information online at www.crimestopperssdm.com. Crime Stoppers does not subscribe to call display and you will remain anonymous. Being anonymous, you will not testify in court and your information may lead to a cash reward of up to $2,000.