(Bradford/Innisfil, ON) The South Simcoe Police Service is urging young drivers to take the Summer #DriveSafe pledge and have a chance to win cool prizes.

On Thursday, June 6, 2019, Community Engagement and Mobilization Unit officers are launching a Summer #DriveSafe Campaign to mark the end the school year. The campaign targets distracted driving, the leading cause of collisions, injuries and deaths on our roadways.

Officers will be attending high schools on June 6, 7 and 10 to create awareness and give students the chance to be photographed with police to promote this safety initiative. By posting photos of the event on social media with the hashtag #DriveSafe and tagging South Simcoe Police Service, students will be entered in a draw to win various gift cards provided by our community partners from Sobeys Innisfil and Sobeys Bradford. The #DriveSafe campaign will include spot checks to ensure that hand held devices are not used while driving.

We want to stop distracted driving in its tracks and ensure you have a safe summer! 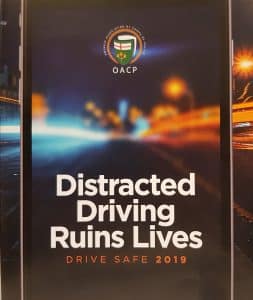